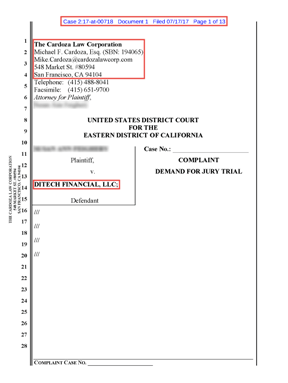 Green Tree Servicing to pay $48 million in borrower restitution and $15 in fines for failing to honor loan modifications put in place by prior lenders.

In 2000, Ditech founder John Paul Reddam resigned on the same day some of his top executives were indicted for trying to extort kickbacks.

Walter Investment and other subsidiaries fined almost $30 million after the Department of Justice accused them of submitting false reverse mortgage claims to HUD, violating the False Claims Act.

Ditech Financial LLC, is a mortgage lending and servicing company, founded in 1995 by Canadian J. Paul Reddam. (It was also referred to as Ditech Funding Corp.) It is privately held and was one of the first lenders to offer mortgages online. Ditech was infamous for its television commercials and the catch phrase “Lost another loan to Ditech.”

Reddam sold Ditech to GMAC in 2000 and the name changed to Ally Financial, Inc. Ally took federal bail-out funds during the 2012 financial crisis and in order to repay those funds, took its mortgage unit into bankruptcy. Today’s Ditech Financial (also referred to as Ditech Mortgage Loans) was formed from remaining assets following Ally’s bankruptcy proceeding. Then in 2013, Ditech became a subsidiary of the Walter Investment Management Company and was known as Ditech Mortgage Corp.

In 2015, Green Tree Servicing (another Walter subsidiary) merged with Ditech Mortgage and became Ditech Financial, LLC and operates as ditech. “No comment” from Ditech/Green Tree after layoffs in Birmingham.

If you're having problems with Ditech, FIGHT BACK using the Real Estate Settlement Procedures Act (RESPA) and download The Killer QWR (for Free) today!

Force Your Mortgage Servicer to Act!