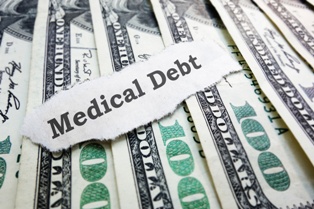 For whatever reason—maybe it was a bad accident, a seriously ill child, or a devastating diagnosis—your medical bills got away from you. You have been unable to pay what you owe to a doctor, hospital, rehab center, or pharmacy, and your account has been sent to collections. This can happen to anyone. It is almost impossible to be financially prepared for a medical emergency, but, unfortunately, the overdue bills may just be the beginning of your problems. If this debt appears on your credit reports, it could affect your interest rates and your ability to open a new line of credit. Under regulations passed in 2017, however, you have some protection from harmful medical debt appearing on your credit report.

Your credit report can be affected by medical debt even if you don’t owe your doctor any money. Anyone who has ever received a bill from a doctor’s office knows how often they contain errors. Complicated coding systems can mean you get billed for the wrong treatment or procedure. A clerical error could mean the bill doesn’t get properly submitted to your insurance company. Whatever the reason, it takes time to sort out and could get sent to collections while you’re trying to figure out what you actually owe. Even when a bill is properly submitted to insurance, it can take weeks to get paid. Depending on your doctor’s or hospital’s policy, it could be reported as overdue or unpaid before insurance has even had a chance to investigate.

These Issues Should Not Affect Your Credit

Thanks to a 2015 lawsuit between New York’s attorney general and the three credit reporting agencies (CRAs), there is now a 180-day waiting period between a bill’s due date and when it can appear on a credit report. Also, as soon as a bill is paid by insurance, it must be removed from your credit report immediately. While this rule was not retroactive—meaning it did not apply to medical debt that was already on your credit report—the CRAs did commit to removing medical debt that should not have been on your report.

What Does This Mean for You?

According to the Consumer Financial Protection Bureau, one out of five credit reports contains overdue medical debt, legitimate or not. There is no way to know when a medical provider will report a past-due bill to the CRAs, so your best bet is to check your credit report regularly. If you find debt that shouldn’t be there, you need to inform the CRA in writing, and they are required by law to investigate and remove it. If they don’t, you may be able to sue for damages.

Do You Have Medical Debt On Your Credit Report?

Contact my office online or call me directly at 855.982.2400 to learn more about getting medical debt off your credit report.