Lying liars and the lies they tell 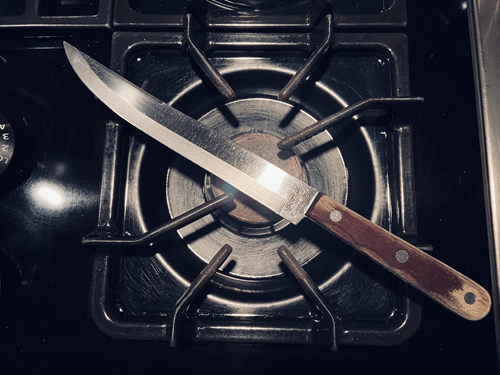 I got this knife from a client of mine.

It’s a kitchen knife and it was a very sweet present. I was at her house for dinner the night before a key deposition in her case. I used it just last night to make dinner for my kids and it brought up a memory that may surprise you.

This particular client called me because someone had been messing with her credit report. Clear as day, there it was, Company X was hammering away at her credit report for something that had absolutely nothing to do with her. It crushed her score and made everything from buying a car for her daughter to refinancing her house - a virtual impossibility.

Not being one to simply take an unjust beating, she called me. We gathered all the facts, helped her craft some letters and get them into the mail, and, when nothing changed, we filed a lawsuit. Ok, the credit bureaus got the picture: here was something wrong that they (unsurprisingly) ignored the first time around (probably because most victims don’t ever file a lawsuit) and now they were going to have to pay the money. And pay the money they did.

But wait, there’s more. Company X - the one who started the whole mess in the first place, they went into denial mode. “Oh no, it wasn’t us! We wouldn’t do that! We didn’t do that! Our employee would never do that!” and, best of all “Your client is probably lying.” Oh, really? Ok, let’s just go ahead and check that out then. Let’s break out the can opener and the long knives and sit down for a deposition.

And depose we did. Now, I wish the law was like TV. You know, close game, tied going into the 8th inning, a real nail-biter! But it usually isn’t. And this case was no different. As I turned on the video camera that I had stuffed in Mr. Corporate X’s face, I noticed that he started playing with his nose and rolling his eyes. Corporate X attorney was still looking fierce, like “you’re making a dumb mistake Mr. Aggressive Consumer Protection Attorney!”

Do you ever catch your kids in one of those self contained lies? The internal inconsistency that has you kindly asking them, “Jack, which one of those things you told me was the truth and which one was the lie?” It was like that, only it went on for 3 hours! Near the end, everyone in the room, even his attorney, felt bad for Mr. Corporate X. I mean, he has a family, kids, coworkers, neighbors. Imagine telling and getting caught in somewhere between 30-40 lies on video tape over the course of 3 hours. It was painful - in a human tragedy sort of way.

What might surprise you, is that most of my cases are like this. The company that did you wrong is going to blow you off, then they’re going to deny everything, then they’re going to blame you for it! That’s just what they have found makes the most money over time - for them. Never mind what the law says they’re supposed to do. I like to break out the tongs and the long knife and cut those stories up to into the little pieces of lies that they actually are, right out there so everyone can see.

That case for the client who gave me the knife? It settled on very favorable terms not long afterwards. Every case is different, but they’re all so very similar. Don’t take “no” for an answer - break out the long knife!